Safe at Sea AB’s (publ) close cooperation with DLRG (Deutsche Lebens-Rettungs-Gesellschaft e.V) has resulted in yet another order of a RescueRunner system which will be used in DLRG’s continuous strive to save more lives on the German beaches, lakes, rivers and sea.

During 2017 the relation with DLRG was established and quickly resulted in an initial order involving both a RescueRunner system as well as an Operator’s training for four of their lifeguards.

It is now  very encouraging to receive a second order from this professional life saving organization which has almost 560,000 members in approximately 2,100 local groups around Germany. DLRG is by that the largest voluntary water rescue organization in the world and including donors, over one million people support the work of the DLRG.

DLRG’s second RescueRunner system will be delivered in May 2018 when they also will be visiting us for an Instructor’s training course with the purpose of certifying the four participating lifeguards so that they later can later demonstrate and train the entire DLRG organization in how to operate and utilize the RescueRunners in their search-and-rescue operations.

"We are very enthusiastic about the fruitful cooperation that is developing between DLRG and Safe at Sea AB (publ) and look forward to continuing the important mission to save more lives, together with DLRG in the future"; says CEO Kaj Lehtovaara.

Safe at Sea AB manufactures and sells a unique rescue boat, the RescueRunner, the most efficient system in the world to bring people in distress out of the water. Safe at Sea AB also is the owner of Safe at Sea Management AB, a company that offers management solutions for the shipping and yachting industries. Safe at Sea AB is listed on AktieTorget. 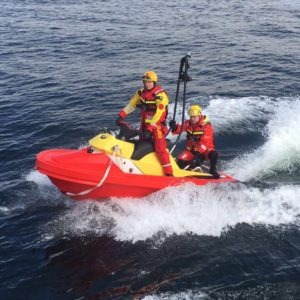 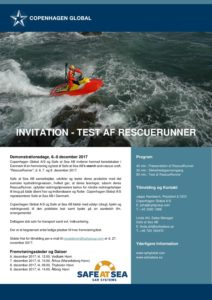